A small collection of my most vivid pieces from the portfolio. Each piece is a finely detailed depiction of the wild world. Click on each image to see a story about its process and inspiration that went into their creation. 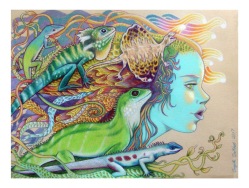 A Tangle of Lizards 9″ x 12″ A piece inspired by the art of Josephine Wall. A female spirit carrying many lizard species in her hair. If you look close, her hair is made of vines and lizard tails. As a kid growing up in the Florida Keys, I would catch lizards all the time. I don’t mind the companionship of lizards. 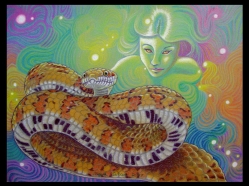 Serpent Goddess 9″ x 12″ For as tedious as the snake scales were to do, this piece is one that makes me happy. The blend of color, the realism of the red rat snake, and the female spirit/goddess all make such an impact visually. I wish every piece would turn out this good. I used photo reference of a coiled snake, a great ready-to-strike pose, and a photo of my own face. The glowing stars/orbs started to almost symbolize the mind or sould, while the colors themselves represent power. 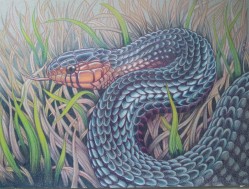 Eastern Indigo 11″ x 14″ Native to Florida and Georgia, the Indigo snake is one of the most unique species in the southern States. Both it’s coloring and intelligence make it an iconic snake.

Mindfulness 9″ x 12″ A portrait on my bearded dragon, based on a photo of him window-watching. I decided on a background of grass and blue sky to reflect peace and meditation.

Cosmic Dragon 9″ x 12″ A portrait of my bearded dragon Gimli. Getting the rows of scales was challenging, and I’m still not sure I got it completely accurate. A little darker than I’d liked because of the grayish paper, but I was quite pleased with the overall details, and I felt I should show that in my portfolio..

The Sun & The Dragon 8″ x 10″ This piece uses all colors of the rainbow despite it’s small size. Based on the ‘scorpion tail’ pose of bearded dragons. I knew I wanted a female face representing the sun looking kindly upon the desert lizard.

SEATURTLE SET 8″ x 10″ Both pieces were 8″ x 10″, and made as a matching pair. I really enjoyed doing these, and it’s amazing how much detail these turtles have even in smaller pieces. They really do look like they are flying when swimming. I managed to render some simple fish and corals in the background of these two. They were framed and sold to a client just in time for Christmas.

Dax 9″ x 12″ A portrait of my Eastern Box Turtle with pothos leaves surrounding him. Based on one of many priceless photos I have of him. The eyes of this turtle absolutely have soul, and he definitely is very aware of what’s going on and occasionally wants to be part of it. 🙂

Gopher Tortoise in Grass 9″ x 12″ One of the oldest species of chelonians, gopher tortoises are a keystone species who aid the survival of other animals who use their burrows.

Scarlet Falls 9″ x 12″ I challenged myself to do a more detail rich background for one of these beautiful birds. I had to use several reference photos to create the scene I wanted. I struggled a bit with the rocks behind the waterfall, and the rocks in the pool were a little more smooth textured than I intended. In the end though, the composition really made the piece complete.

Eastern Bluebirds 11″ x 14″ A mated pair of bluebirds (female in back, slightly more drab) hanging out in a dogwood tree full of pink flowers. I’d been wanting to do another pair of songbirds since I did the cardinals, so bluebirds were my first choice. I also knew I wanted pink flowers of some kind to compliment the blue plumage. The background is a muted blur of foliage. The first time I ever caught sight of a bluebird, it was a flash of brilliant blue at a bird feeder from far away. the only time I saw these birds up close was from a window near a birdhouse. While watching a female bring insects to a birdhouse where her chicks were, I noticed the females of the species are just barely different in color from males. The color combination of this species is very striking in person.