I recently had several of my pieces put on display at a local library in my area. The beginning of July was when I dropped them off to be hung, and the exhibit ends at the end of August. I’m putting more effort into having my work displayed locally when I can. I’ve frequented this library alot, since I’m an avid reader of science fiction, and other related things.

I’ve also maintained my work on other pieces of native wildlife in my Florida neighborhood. If you keep up with my instagram account, you’ll have seen these already. I will be adding them to the portfolio page of this site. 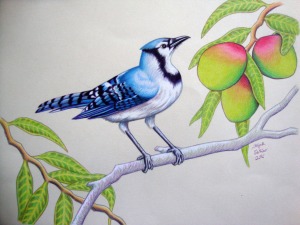 Growing up in the Florida Keys, I’d never seen them before. I was fascinated with them when I first moved to the Tampa Bay area. Like many songbirds, they are nearly acrobatic in flight, and happily raid bird feeders. They are bold enough to drive away other birds from food. They also are the first to call out a perched bird of prey, often mobbing the individual until they leave. They carry a wide array of calls, even adding some mimicry to the vocabulary. They can go from loud piercing metallic calls to low peeping chatter.

I purposely kept this minimalist, to remain focused on my subject and the flora I wanted to include. The brightness of a Blue Jay’s plumage is often overlooked, and I wanted to highlight that. Along with the tropical nature of Florida, I decided to at the foliage and fruit of the mango tree. 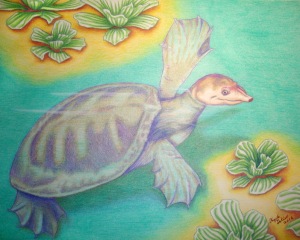 Instead of the hard shell most turtles possess, the softshell has a thick leathery covering upon its back. This reptile also has smooth skin on its head and extremities. Almost doesn’t look like a turtle. I’ve spotted (and rescued off the road) some of these several times. In freshwater ponds, they tend to stay hidden in the murk until they smell or see something worthy of investigation. It’s hard for me not to think them wise when I see them raise just their eyes above water to look my way. They watch and wait. Suppose they have to, since they are fair game for gators and people who like to cook and eat them.

I tried to add a brightness with my choice of colors for this piece, especially in the background. Most photos and the overall environment of these turtles tends to be very drab in color, and would wash out some of the mood and detail I wanted to keep. 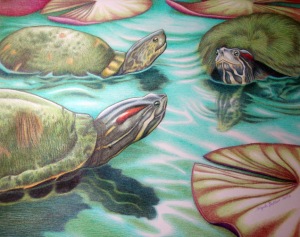 Based on a photo of several wild freshwater turtles I’d taken a few years back. All of these turtles are Red Eared Sliders, with the turtle on the upper left being an old male who’s colors have faded with age. I had been cheating in a way, in order to get these photos. I was feeding them so I could  get closer shots of them, and see the different patterns/stripes on each of their heads. Most of their shells were covered with algae. I couldn’t help but notice after looking at the photos I’d gotten, that they all seemed at one point to just sit and stare at each other between the time I threw more food. As if assessing which of them was more prepared to fight for the next morsels. Thus, the title “Turtle Poker” came about.

As with the above piece, I brightened some colors in the environment, and added upon that by adding lily pads.

A simple piece on tan pastel paper. No background, but the light, mid-tones, and shadows came out beautifully on this color of paper.

Based on a photo reference found online. Great for practice with reflective water surfaces, and I was happy with the final product.

So much to do, but seems like there’s not enough time and energy to do it all. Be back soon.